This is not a dissertation, not even an article, but just a casual essay.

I’m not used to paying attention to trivial things. Occasionally I go to art exhibitions – in most cases just on an impulse, without deliberately understanding the background of the featured artist. Even if I decided to visit a contemporary art exhibition, I rarely read its promotional texts, which, of course, are supposed to be excellent articles. But for someone like me who have little exposure to contemporary art the vocabulary of the art field is rather cryptic. Therefore, being a super laid back person I preferred to engage directly with artworks but with Cai Guojie’s Half-Field Plan series it happened otherwise.

If not familiar with him, you can’t feel the intertwining contradictions in his works as well his love for the common people. He doesn’t present himself as such a persona but his subconscious is revealed through the works.

Art is also a cultural issue but few young artists look at art from that perspective. Today’s youth suffer from anxiety and pains while growing up, but contemporary works rarely address these. Having little contact with society’s grassroots, artists inevitably end up creating works without spiritual vision, depth and the feeling of pains. In our era art requires languages from a deeper well. Cai Guojie reveals, in a philosophical framing, the suffering of the contemporary youth. The series of exhibitions of the Half-Field Plan and their meaningful language exposes a mental crisis brought by land ownership.

Mother Earth created humans with yellow earth, and they reproduce exponentially, either survive or get trampled. Meanwhile, the cloud of smoke created by mankind and the pressure of survival has never let go the grasses as humble as yellow earth, and has never given freedom to sentient beings as low as yellow earth. We are constantly struggling to obtain living space under our self-created pressures. While plants and trees thrive and wither, none of which can escape the cycle of life, and the earth, like a philosopher, beholds all these in silence, never uttering a word.

Currently living in Macao, Cai Guojie grew up in Taiwan living through a net of mixed forces, hence he did not get enough warmth and sufficient identity recognition, which has led to his weak sense of belonging. Additionally, anxiety and an unstable environment in his growth, made him very concerned about land and land ownership. Focusing on the issue of land ownership his Half-Field Plan presents step by step the entire land operation mechanism involving parties from the government to the developer, hoping that the visitors can feel the sharp issues behind the exhibitions while inviting their deep reflection on “who I am”.

Cai Guojie did not depict the contradictory manifestations of the human versus nature relationship, such as degraded ecological safety, tight resources, and environmental pollution. Instead, with a soft yet sharp approach he pointed straight to the reasons behind the complex relationship between man and land. Obviously he took a long time to ponder each step to be taken in the Half-Field Plan. Man is the active factor in the ‘man-land system’, and also the influencer of that relationship. Cai Guojie attracted the public into the space he had created, intending to guide them to reflect on the reasons behind the man-land relationship.

The Half-Field Plan explores the “power field” concept in art, involving a transfer of power from (abstract) concept to physical entity that exposes the issues of distribution of land and space in cities. Half-Field Plan takes interspace as the object on ownership agreement signed (with exhibition visitor), thus conducting a space/land sales activity. On the other hand, in order to pursue freedom missing in real life, the public is willing to purchase from the artist the borderline land between fantasy and reality, as a way to escape from reality.

Cai Guojie started to conceive the Half-Field Plan in 2004. It all began with his conceptual thought on the boundaries of lands. He exhibited works first in Taiwan, and later in Macao, Italy, Hong Kong, France, Beijing, with the concept gradually evolving into maturity.

When Cai Guojie elaborates his creative ideas, he likes to use languages from his true inner, yet absolutely well thought and refined. A first read of his article gave me a feel that he was using an ethereal language, inaccessible, one that was as if traveling through time and space. But it is definitely not composed of abstruse vocabularies. Once delving into it slowly, one would find it particularly flavorful. Words used by Cai Guojie are well honed and pertinent, in a way similar to how Tang poet Jia Dao pondered over the choice of every single word.

What Is Land Meant to Humans?

Land nurtures lives; land is from where we came and to which we belong. The legend that man was created out of earth is not a scientific truth, but rather a philosophical truth.

Through the Half-Field Plan, Cai Guojie sheds light on the issue of land ownership, re-presenting the contradictious game of buying-and-selling land ownership. He fully reveals the land ownership mechanism operated by the government, land developers and real estate developers, resisting rules with rules themselves and hoping people to reflect on “who I am”.

“Homeland” Made Me Feel Awe And Yet More Pain

In 2019, Cai Guojie hosted the “Homeland” activity in Paris, France, where he bought from participating refugees the borderlines of their original residences. He invited the refugees to recall and draw pictures of their hometown houses and map the adjacent streets. The artist then purchased from these refugees ownership of margins of error (occurring when dividing land and floor spaces) and signed agreements with them.

In my view, Cai Guojie’s “Homeland” in the Half-Field Plan series created an impact able to touch the heart immensely. Like an acupuncturist, he cured patients in a very calm, accurate yet strong way. The sketches of the homes drawn by the refugees made me feel awe, or, I actually felt more pain than awe.

I don’t know how other visitors felt. When I learnt about this exhibition and read the programme, I just felt sad, for the artist, for the refugees, and for all the struggling people. Cai Guojie’s experience is the inspiration source for his creation and also the basis for his value judgment. I believe that he must have experienced some inner struggles when planning this event. For Cai, recalling homeland with the refugees could easily cause pain. Perhaps, as an expatriate, when he saw the refugees map their homes, his heart was crying.

While coming to understand what inspired Cai Guojie’s Half-Field Plan, while reading the works on display, I never felt ease in his exhibition. His works are not lively at all, despite that we were surrounded by visitors and that there might be exciting discussions brought about by the borderline transactions. Appreciating his work, I still felt lonely and painful, feelings that I only had had in exhibitions reminiscent of history. Cai Guojie’s artwork made me finally understand that, for us, the helpless ones, it will be so sad to just look forward to the future.

Whether in art appreciation or creation, memory is a very important factor. For Cai Guojie himself, for the refugees, and for the general public, original feelings and love for the homeland always remain there.  Awe for land, nostalgia for homeland, commitment to life, and yearning for freedom. These are what drive all civilizations’ development.

In “Homeland”, Cai Guojie reconstructed a scene mixing together memories and in-depth thinking, which served to attract public attention to land ownership. Yet, what he truly hoped was that the public would explore the reasons behind this issue.

Why do some people become refugees?

As a refugee, am I still entitled to land ownership?

Can I really sell land to the artist?

Where did my land go?

It was my land, isn’t it still mine now?

Who gave me land ownership?

Who deprived me of my land ownership?

Why does my land ownership have to be given?

Shouldn’t Iand be a birthright?

Why “Homeland” Chose The Refugee Community

‘International refugees’ generally refer to people who have been forced into exile, due to natural disasters, wars, or political persecution and refugee problem is now an acute cross-border international issue with millions of refugees from Eastern European countries, Africa and Asian countries having swarmed into Western Europe.

The refugee issue is always tangled with politics and politics is an eternal topic of contemporary art. When art deals with politics, it will certainly be sharp and pungent in confronting the world’s power establishment. Cai Guojie did not rush into the political topic, however, using the refugees as a reference he demonstrated and explored the issue of land ownership. Doing so, he prompted us to think anew: are we not also refugees?

Syrian refugees were required to provide property ownership certificates while the war was still going on. Their plight is still fresh. When millions of Syrians were forced to abandon their homes during the war, President Assad issued a new decree requiring residents to register (with the government) their residences within one month. Failing to do so would mean that properties would be confiscated. To the millions of Syrian refugees who were displaced, this politically charged decree would make them lose their homes forever. Refugees who have been forced into exile would lose the land, which means life to them. They have to live in a new country or a new place, without a sense of belonging, with a worsening identity crisis.

We and refugees both need a sense of belonging. Maslow, a known American humanistic psychologist, proposed the theories of hierarchy of needs in his work Motivation and Personality. He believed that “the needs for love/belonging ” are important psychological needs of humans, and “self-actualization” can only be fulfilled by meeting those needs. People’s sense of belonging reflects the indivisible relationship between individuals and the cultural world. Sense of belonging is the basis of individual spiritual needs and is the mother of all meanings. An individual’s missing the basic sense of belonging would give rise to loneliness. Human beings always strive to regain a sense of belonging by all means.

The Call for Returning to Land and for Freedom

The history of man-land relationship evolution is also a history of human development and of the formation of humanistic nature. Mankind’s infinite demand and pursuit in regard to survival and development is the potential main thread in the evolution of man-land relationship. Only by rebuilding a sense of cultural belonging and a spiritual connection between man and land, returning to land, respecting, treating well, and adapting to land, can we fundamentally improve cultural identity and identity recognition. Returning to land means returning to it in its widest sense, not just in economic or other senses. Real freedom can only be attained by understanding land anew and rebuilding a harmonious man-land relationship.

Stories about refugees are as long and as rich as human history. For every country, every people, every person, at a certain place or time, we could all be the refugees. Cai Guojie is a stubborn and brave fighter, a pioneer on his own. It is not difficult to dare to challenge, but he does so on a universal dimension and raises in-depth questions about land ownership on behalf of all struggling people. He introduces people to the reality and thus makes his work more soul-stirring.

Enclosed is a note of my feelings:

Why I always have tears in my eyes?

Because I love this land so deeply… 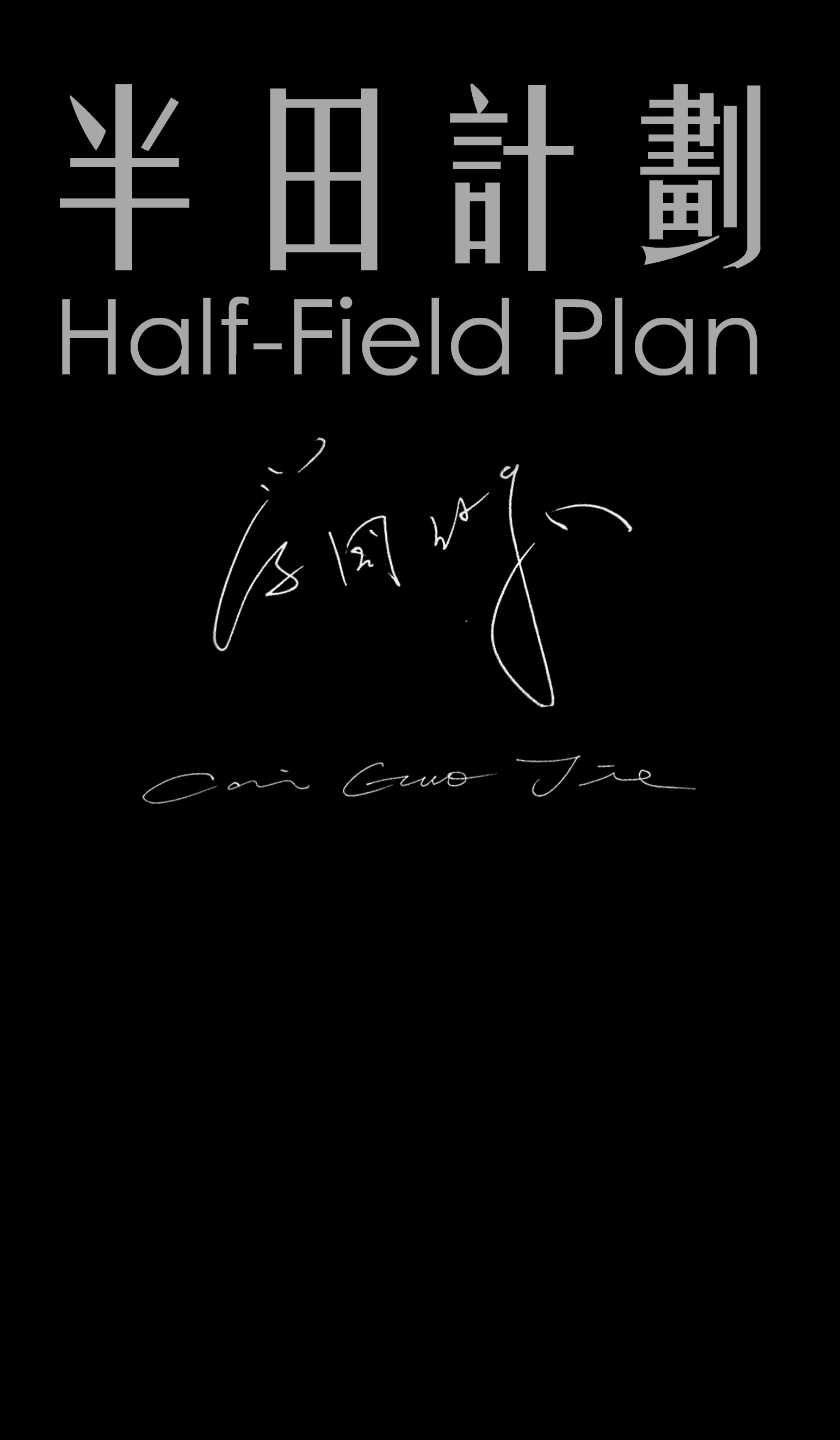